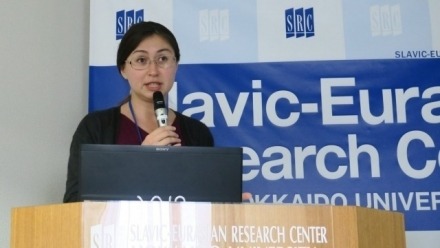 Dr Aminat Chokobaeva, a former CAIS research scholar, has been selected for a position as a post-doctoral scholar in Eurasian Studies at the School of Humanities and Social Sciences at Nazarbayev University in Nur-Sultan, Kazakhstan. Aminat was awarded her ANU doctoral degree in July 2017 having completed a thesis on the topic: 'Frontiers of Violence: State and Conflict in Semirechye, 1850-1938'. Dr Chokobaeva said her choice of research topic was opportune as the centenary anniversary of the uprising took place in the middle of her candidacy. Her post-doc is for two years and will consist of both research and teaching.
Over the course of her PhD program, Aminat has been very active. Presenting at conferences in Europe, Central Asia, Asia and Australia. This activity has served her well in making contacts and building her profile in the regions. She has recently lectured in the history program at The University of Sydney and tutored in numerous courses at ANU.

Aminat's supervisor, Dr Kirill Nourzhanov, and all CAIS staff congratulate her on these achievements.

Dr Chokobaeva participated in the organisation of the workshop: 'Rethinking Resistance: The 1916 Uprising in Central Asia', held in Bishkek, Kyrgyzstan, May 2016. A central aspect of her research she describes below:

The year 2016 marks the centenary of the 1916 Uprising in Central Asia. The largest and by far the most violent national protest against Russian colonial rule, the Uprising of 1916 remains one of the lesser-known episodes in the history of the region. Its causes were rooted in economic inequalities and social exclusion imposed on the indigenous population by the imperial authorities. Its impact on the local society was profound as it disrupted agricultural production, resulting in a refugee crisis, and led to increasingly violent competition for dwindling resources between the colonists and the local farmers and pastoralists. (See images of the conference exhibition below)